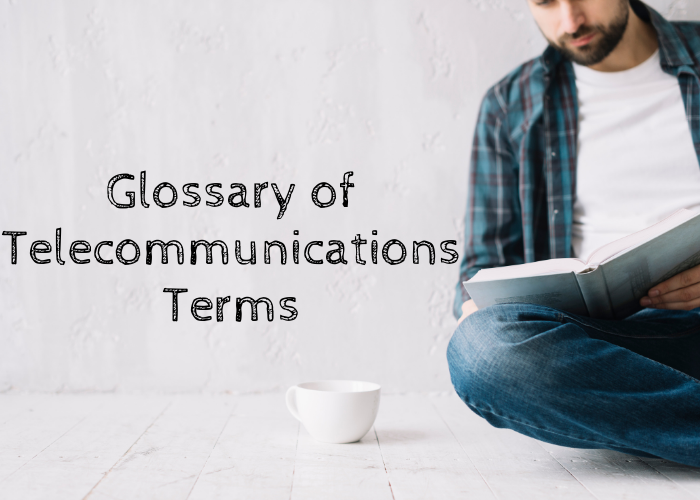 In this post we have compiled a glossary of some of the most commonly used terms in the telecommunications sector. So if you have any doubts, here you can clarify the meaning of the most important acronyms. DID – Direct Inward Dialing (also called DDI in Europe) is a feature offered by telephone companies for use with their customers’ PBX system, whereby the telephone company (telco) allocates a range of numbers all connected to their customer’s PBX. DTLS – Datagram Transport Layer Security is a communications protocol designed to protect privacy in communications and prevent their interception and manipulation. IaaS – Infrastructure as a Service (IaaS) is a type of cloud computing service that provides essential computing, storage and networking resources on demand on a pay-as-you-go basis. IaaS is one of four types of cloud services, along with software as a service (SaaS), platform as a service (PaaS) and serverless. ISDN – Integrated Services Digital Network – is a type of circuit switched telephone network system, designed to allow digital (as opposed to analog) transmission of voice and data over ordinary telephone copper wires, resulting in better quality and higher speeds, than available with analog systems. IVR – In telephony, Interactive Voice Response – is a computerised system that allows a person, typically a telephone caller, to select an option from a voice menu and otherwise interface with a computer system. PaaS – Platform as a Service is a complete development and deployment environment in the cloud, with resources to deliver everything from simple cloud-based applications to sophisticated cloud-enabled enterprise applications. PBX – Private Branch eXchange (also called Private Business eXchange) – is a telephone exchange that is owned by a private business, as opposed to one owned by a common carrier or by a telephone company. It is also known as a virtual switchboard. PSTN – Public Switched Telephone Network – is the concentration of the world’s public circuit-switched telephone networks, in much the same way that the Internet is the concentration of the world’s public IP-based packet-switched networks. RCS – Rich Communication Services (RCS) is a communications protocol used to replace SMS messages. RFC – Request for Comments (plural Requests for Comments – RFCs) – is one of a series of numbered Internet informational documents and standards very widely followed by both commercial software and freeware in the Internet and Unix communities. RTCP – RTCP stands for Real Time Transport Protocol. RTCP works hand in hand with RTP. RTP does the sending of the data, where RTCP is used to send the control packets to the participants in a call. The primary function is to provide feedback on the quality of service provided by RTP. RTP – stands for “Real Time Transport Protocol”, and defines a standard packet format for sending audio and video over the Internet. SaaS – This acronym refers to Software as a Service. It is a cloud-based software delivery model, in which a provider develops and maintains application software in the cloud, provides automatic software updates, and makes the software accessible to customers over the internet on a pay-per-use basis. SDP – SDP stands for Session Description Protocol. The Session Description Protocol establishes a standard for defining the parameters for the exchange of media (called streaming media) between two (typically) endpoints. SIP – Session Initiation Protocol – is a protocol developed by the IETF MMUSIC Working Group and proposed standard for initiating, modifying, and terminating an interactive user session that involves multimedia elements such as video, voice, instant messaging, online games, and virtual reality. SRTP – Secure Real-Time Transport Protocol is an extension profile of RTP (Real-Time Transport Protocol) that adds security features, such as message authentication, confidentiality and response protection, mostly intended for VoIP communications. UcaaS – Unified Communications as a Service (UcaaS) is a cloud-delivered unified communications model that supports a variety of communication and collaboration applications and services. VoIP – Voice over Internet Protocol (also called IP Telephony, Internet telephony, and Digital Phone) – is the routing of voice conversations over the Internet or any other IP-based network. We hope this telecommunications glossary has been helpful. Photo: Microsoft Azure     Sources: 3CX Microsoft