History and evolution of the telephone switchboard 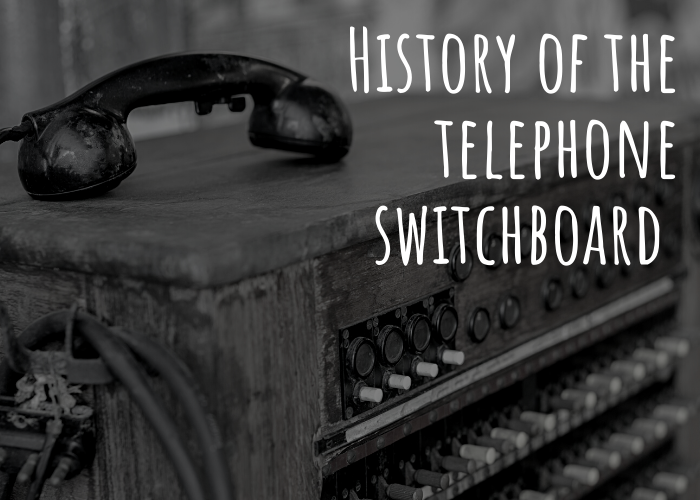 In this post, we are going to take a trip to the past to learn about the origins of the telephone switchboard up to the present day. We will discover how it has evolved to the use of virtual switchboard as we know them today.

If you want to know the history and evolution of the telephone switchboard keep reading.

Evolution of the telephone switchboard to digital

More than 160 years ago, Antonio Meucci invented the telephone and it was only in 1876 that Alexander Graham Bell patented it.

Its use was a major step forward for worldwide communication and globalization began to expand at a faster pace. The first manual telephone switchboard was found in the United States in 1878, at that time it was the only possible method and the switchboards had to be manual.

The distribution of calls was done by operators (almost always women) who were in charge of connecting the network plugs to the corresponding sockets. In this way, the person making the telephone call was actually contacting the switchboard first, which plugged the plug into the socket corresponding to the person receiving the call.

Now we go back to 1889 when Almon Brown Strowger invented the automatic telephone switchboard with 21 subscribers. This invention came about because he realized that one of the operators was forwarding calls to the competition, so he wanted to avoid forwarding calls manually and that they could listen to private conversations.

In November 1891, the first automatic telephone switchboard for 99 subscribers was installed in Indiana, specifically in La Porte. Its introduction was a great success, although it did not please the operators, who would lose their jobs. The switchboard technology arrived in Europe in 1898, after several improvements.

We move on to the era when computers and the rise of the Internet began to be used. In 1941 the first computer was created and in 1969 the Internet was born. As we all know, these inventions have presented interesting innovations and improvements over the years, giving rise to the virtual switchboard.

The virtual switchboard offers the same functionalities as the old manual switchboards plus many other features thanks to its hosting in the cloud, which allows us to add updates and the versatility is enormous.

They became more and more popular in the 2000s and now it is the immediate future that companies and freelancers who need to make calls to their customers or want to provide excellent customer service will have to adapt to.

By 2025 it is expected that analogue telephone networks will cease to function and the ISDN line will be switched off to digital networks, making VoIP the only solution.

You will simply need to have a virtual switchboard or cloud telephony system.

We cannot miss this opportunity to talk about manual switchboard operators. Surely the first image that comes to mind when you think of a switchboard is that of a telephone or one of these women operators surrounded by cables and huge connection systems.

As we have already mentioned, the first telephone systems required human labor to establish connections between two users. Each pair of pins was part of a circuit with a switch that allowed the operator to participate in the call. Each pin had an indicator light on the top that would light up when the handset was lifted on the phone trying to call (in the early systems it was necessary to wind up a generator in order to complete the call).

Its operation was as follows: people who needed to make a call would contact the operator in the central office, she would connect a wire to the appropriate circuit to connect to another switchboard operator, who in turn would connect the call to the correct person and the conversation could be established. Being in complete control of the call, the operator was in a position to listen in on private conversations at all times.

These women worked under difficult conditions and were the first to connect the world. The reason this job was mostly performed by women is because they were more courteous to the callers, more diligent and quicker in handling the circuits, as well as noted for their discretion and gentleness of voice.

What is the best virtual switchboard?

The best virtual switchboard is the one that offers the functionalities that your company requires and adapts to your business as you grow. You can have a PBX on your PC, Tablet and mobile through a softphone, so the flexibility it offers is enormous.

In addition, thanks to its versatility for being hosted in the cloud allows integration with different software, and you can have music on hold, interactive voice response (IVR), voicemail, display the phone number you want and talk between extensions for free, even if each employee is located in different parts of the world.

At Megacall we are specialized in virtual switchboard and VoIP telephony since 2008, ask us and we are sure we have a solution for you.