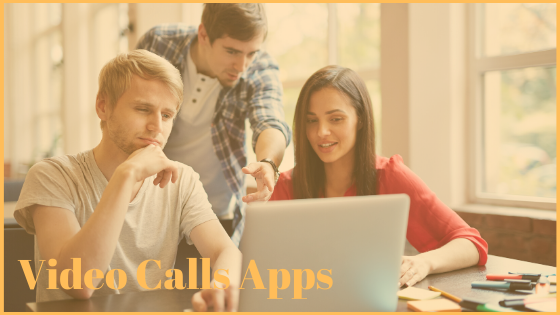 In this post we are going to show you which are the best 10 free video calling apps. All of them can be used on the mobile and most of them can also be installed on the computer.

It is a very successful solution for conducting group meetings when workers are in different locations or if it is a company whose operation is teleworking or remote work.

This type of video calling apps also benefits customer service, since meetings can be held with customers who do not have the possibility of going to the company headquarters for any reason.

Let’s see which are the most popular video calling apps:

1. Google Duo: This app could be described as the Facetime of Android. It already comes pre-installed on Android devices by default with the advantage that it is also compatible with iOS. Its most interesting function is Knock Knock which, being activated at the user’s decision, allows the receiver to see the image of the person who is calling him before taking the call. The caller knows that your camera is activated from the moment you press the call button and can deactivate the function at any time.

2. Skype: Possibly one of the most widespread tools for making video calls. It is primarily intended for computers and continues to be the most popular choice for professionals when it comes to organizing group meetings and conferences.

3. Facetime: The flagship app for iOS and MacOS to make video calls. As an advantage, it stands out that it comes pre-installed on the device and is very easy to use. Furthermore, it is also useful to be able to mark some contacts as favorites and make a video call with them directly from the home screen. The downside is that you can’t use it to communicate with users who don’t have an Apple device.

4. Zoom: This app is undoubtedly the best option to make professional video calls: it allows you to make video conferences with up to 100 people, share screens, files, dropbox folders or similar. It can be downloaded for both iOS and Android.

5. WeChat: This app for making free video calls offers exactly the same as WhatsApp, and is less widespread. However, it is one of the few apps to make video calls that works in China. It is compatible with iOS and Android.

6. Whatsapp: Today most users use this instant messaging app to communicate with their contacts, and making a video call is free and easy. Thus, it also allows you to write to other contacts, send photos and use your smartphone during the call. Recently, the option of making group video calls was included. You can download it on iOS and Android.

7. Facebook Messenger: It is very easy to use since it is enough to open the conversation of the person with whom you want to make the video call and click on the video button. Other advantages are the possibility to continue chatting and keep the video active, and the fun option of using Facebook filters while making the video call. It is compatible with iOS and Android and is completely free.

8. Hangouts: This application comes pre-installed on the vast majority of Android mobiles and is also available on the computer. In Hangouts you can have a group video call with 10 people on Android and, although you do not have access to all the options and accessories of the great Hangouts for web, the system works well and with a fairly stable connection thanks to its recently included P2P technology.

9. Oovoo: It is a video call application for PC that also has an Android version. In this case, you can have a group video call with up to 12 people at a time.

10. VSee: This application to make online video calls is very convenient in case you have little coverage since it works especially well in 3G networks with low signal. Therefore, we cannot expect great call quality. You can make free group video calls up to 4 people at a time.

Other options for conference calls

3CX Video Conference: If you are a 3CX client you will be able to use their Video conferencing technology. It is very easy to use and there is no need to download and install any additional software or plugins in your computer. In case you want to use it from your smartphone, you will need to download the 3CX WebMeeting application. With the 3CX Video Conference option you can create, schedule, manage and join ad-hoc conference calls. You can find more details on its website.

Finally, we recommend another option available to make group calls in case it is not mandatory to use the video or the camera. With a virtual switchboard or another VoIP telephone system, you can use the Call Conference option. This feature allows calls to be made with several users at the same time, making it possible to hold remote meetings.

VoIP software for business remains incredibly popular and is expected to undergo massive growth in...

The importance of customer service in 2021

Building a good customer experience has never been more important than it is today. The importance...

In this new year, technological trends have not changed much since last year. They continue to...